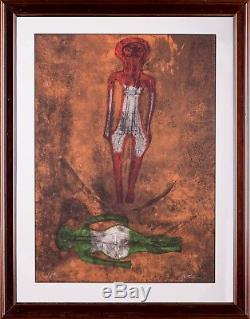 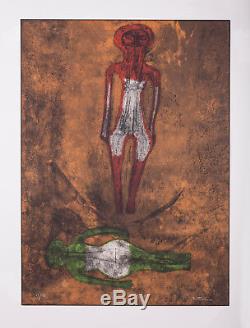 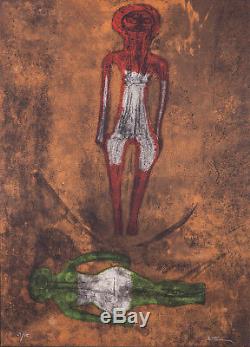 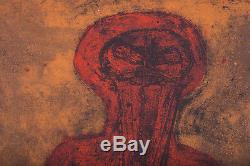 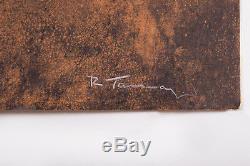 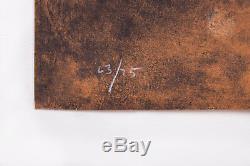 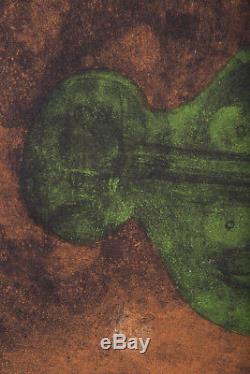 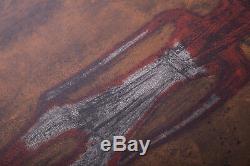 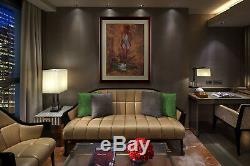 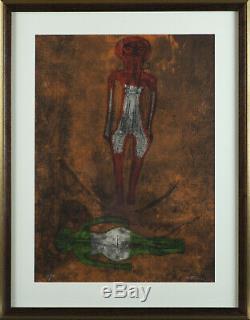 Rufino Tamayo, along with other muralists such as Rivera, Orozco, and Siqueiros, represented the twentieth century in their native country of Mexico. Tamayo devoted himself to creating a distinct identity in his work. He expressed what he envisioned as the traditional Mexico and eschewed the overt political art of such contemporaries as José Clemente Orozco. He disagreed with these muralists in their belief that the revolution was necessary for the future of Mexico but considered, instead, that the revolution would harm Mexico. In his painting, Niños Jugando con Fuego (Children Playing with Fire , 1947), Tamayo shows two individuals being burnt by a fire they have created, a symbol of the Mexican people being injured by its own choice and action. Tamayo claimed, "We are in a dangerous situation, and the danger is that man may be absorbed and destroyed by what he has created". Due to his opinion, he was characterized by some as a "traitor" to the political cause. Tamayo came to feel that he could not freely express his art; he therefore decided in 1926 to leave Mexico and move to New York City. Prior to his departure, Tamayo organized a one-man show of his work in Mexico City where he was noticed for his individuality.

Rufino Tamayo's legacy in the history of art lies in his oeuvre of original graphic prints in which he cultivated every technique. Rufino Tamayo's graphic work, produced between 1925 and 1991, includes woodcuts, lithographs, etchings and "Mixografia" prints. With the help of Mexican painter and engineer Luis Remba, Tamayo expanded the technical and aesthetic possibilities of the graphic arts by developing a new medium which they named Mixografia. This technique is a unique fine art printing process that allows for the production of prints with three-dimensional texture. It not only registered the texture and volume of Rufino Tamayo's design but also granted the artist freedom to use any combination of solid materials in its creation.

Rufino Tamayo was delighted with the Mixografia process and created some 80 original Mixographs. One of their most famous Mixografia is titled Dos Personajes Atacados por Perros (Two Characters Attacked by Dogs). In 1935, Tamayo joined the Liga de Escritores y Artistas Revolucionarios (LEAR).

The LEAR was an organization in which Mexican artists could express through painting and writing their responses towards the revolutionary war and governmental policies then current in México. Although Tamayo did not agree with Siqueiros and Orozco, they were chosen along with four others to represent their art in the first American Artists' Congress in New York. Now married, Rufino and Olga had planned on staying in New York only for the duration of the event; however, they made New York their permanent home for the next decade and a half. In 1948, Tamayo's first major retrospective was held at the Palacio de Bellas Artes in Mexico City.

Although his positions remained controversial, his popularity was high. Uncomfortable with the continuing political controversy, Tamayo and Olga moved to Paris in 1949 where they remained for the next decade. Tamayo also enjoyed portraying women in his paintings. His early works included many nudes, a subject which eventually disappeared in his later career. However, he often painted his wife Olga, showing her struggles through color choices and facial expressions.

The shared difficulties of painter and wife can be seen in the portrait Rufino and Olga , circa 1934, where the couple appears broken by life's obstacles. Tamayo also painted murals, some of which are displayed inside Palacio Nacional de Bellas Artes. Such as Nacimiento de la nacionalidad (Birth of the Nationality , 1952). Would you like to see what this piece looks like in your home? Simply send us a photo of the area you are looking to fill.

We will take the photo and have our piece placed in the space to help you in your decision making. All items are guaranteed 100% authentic. All items are listed with the utmost accuracy. No photos are altered and all photography of our items is produced by the managing director of the Minneapolis Photo Center.

Created for the discerning art collector, Modern Artifact buys and sells some of the world's most collected and demanded fine art, antiques and memorabilia. Modern Artifacts is headquartered in Minneapolis, MN and has clients all over the world. We establish relationships with many art dealers, collectors and the artists themselves, to ensure our clients are offered an extensive collection to choose from. With many fine works of art by top names such as Robert Wyland, Steve Kaufman and Bert Stern, you are sure to find a piece that catches your eye and inspires your imagination. Shop with us online today and experience one of the industry's leading art, antique and memorabilia retailers for yourself.

High Quality, Unique Works of Art Modern Artifact specializes in high quality, unique works of art. We have the hard to find pieces that you have been searching for and some of the eclectic ones you didn't even know about but just have to have. We understand the needs of our clients and seek out the pieces they want to add to their collection. Whether you are new to art collecting and are just building your collection, or if you have been collecting fine art and antique for years, Modern Artifact has you covered. All of our art is photoed by a professional photographer and not enhanced using photoshop. Some instances we will photoshop a piece into a home scene, however while doing that photoshop is not used to brighten or alter the individual piece. All photos are taken in natural light. If you would like to see a piece upload into an area of your home please send us a photo and we will gladly do that free of charge.

We would be glad to answer any questions you may have. We have in house professional packaging for your valuables to ensure that they show up in tact and ready to enjoy.

Every piece of ours is guaranteed authentic and comes with a gallery certificate of authenticity along with all original paperwork. Our experts have authenticated tens of thousands of pieces so rest assured you are getting authentic art. All pieces go through rigorous background checks and testing to ensure their authenticity. Would you like us to frame any of our art to match your current framing or home?

We have our own in house framing. We can show you examples and even photoshop the frame onto the piece to give you an idea of what it will look like.

This item is in the category "Art\Art Prints". The seller is "modern_artifact" and is located in Minneapolis, Minnesota. This item can be shipped worldwide.