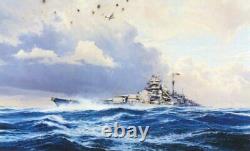 "SIGHTING THE BISMARCK" by artist Robert Taylor is a signed and numbered limited edition print from an edition of only 850 prints. In the early hours of May 24, 1941, as the mighty German battleships Bismarck and Prinz Eugen slipped through the Denmark Strait, they were dramatically intercepted by the Royal Naval battleships Hood and Prince of Wales. Within six mutes of the first salvo being fired, the Hood, pride of the Royal Navy, was blown out of the water in one of the most gigantic explosions ever witnessed at sea.

Bismarck's fourth salvo landed a shell forward of the Hood's after turrets, piercing her deck, exploding the 4-inch magazine. Simultaneously this detonated the adjacent 15-inch magazine, and in one mighty eruption the battleship broke in two. Within seconds she was gone. Of the ships company of 1400 officers and sailors only three survived. Outraged at the grievous loss Winston Churchill signaled the admiralty just three words: Sink the Bismarck!

Thus began one of the epic sea chases in the history of naval warfare. Damaged by shells from Prince of Wales's 14-inch guns, and losing fuel oil, Admiral Lutjens broke off the engagement and steamed Bismarck towards the anonymity of the North Atlantic. Evading the British warships for 32 hours he had hopes of reaching the safety of Brest, but when spotted by a Catalina of RAP Coastal Command, Lutjens knew it was the beginning of the end for the mighty German warship. When an attack by Ark Royal's Swordfish torpedo planes jammed her rudder Bismarck's fate was sealed.

As she limped haphazardly through the waves trailing oil, the Home Fleet closed in for the final encounter. Overwhelmed by British guns and torpedoes, Bismarck's crew fought a gallant last battle, but the odds were too great. Watching Bismarck's final moments from King George V's bridge, Admiral Tovey said: She put up a noble fight against impossible odds, worthy of the old days of the Imperial German Navy. In "SIGHTING THE BISMARCK" master-painter of sea and sky Robert Taylor portrays the Bismarck at the fateful moment she was located by RAP Coastal Command. Greeted by a defiant barrage of fire from Bismarck's anti-air craft guns, the Catalina veers away, but already the radio operator has, transmitted her position. Like the Hood just two days earlier, the pride of Hitler's Kriegsmarine was by now, destined for the deep. In addition to the artist this print was individually signed in pencil by FOUR Bismarck survivors. This mint condition print has never been framed and, like all of our prints, has been stored flat. It measures approximately 32½" x 23½" and comes with a descriptive Certificate of Authenticity and a four-page color sales brochure. This beautiful, incredibly detailed print is in mint condition, measures 11" x 17", and has been signed and dated by the artist. GOOD LUCK AND THANKS FOR LOOKING! The item "ROBERT TAYLOR Sighting the Bismarck 4 Survivor Signatures SOLD OUT withBONUS PRINT" is in sale since Friday, April 24, 2020. This item is in the category "Art\Art Prints". The seller is "brawnerfarm" and is located in Goldsboro, North Carolina. This item can be shipped to United States, all countries in Europe, Japan, Canada, Australia.