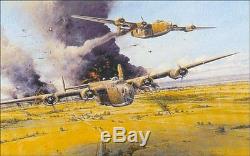 "PLOESTI - THE VITAL MISSION". "PLOESTI - THE VITAL MISSION" by the great artist Robert Taylor is a signed and numbered limited edition print from an edition limited to 1250 prints. Dont miss this great opportunity! On August 1, 1943 five American B-24 Bomber Groups flew a perilous raid against the oil refineries at Ploesti. The losses in the raid were extremely high.

In the magnificent "PLOESTI - THE VITAL MISSION" Robert Taylor captures the drama and tragedy: Colonel Leon Johnson aboard the damaged Suzy Q emerges through an inferno of intense ground fire and dense palls of acrid burning oil. More seriously hit and smoking, another B-24 Liberator completes its bombing run. By the end of the day, the Ploesti oil fields were in ruins and the B-24 crews of the 8th and 9th Air Forces had dealt a vital blow to the Axis war machine.

In addition to the artist this print was individually signed by representatives of FIVE (5) Bomber Groups that flew the Ploesti Mission. This mint condition print has never been framed and, like all of our prints, has been stored flat. It measures 34½" x 25", and comes with a Certificate of Authenticity. GOOD LUCK AND THANKS FOR LOOKING!

The item "ROBERT TAYLOR Ploesti the Vital Mission B-24 Bomber OIL REFINERIES SOLD OUT RARE" is in sale since Saturday, June 17, 2017. This item is in the category "Art\Art Prints". The seller is "brawnerfarm" and is located in Goldsboro, North Carolina.