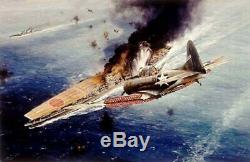 "MIDWAY-STRIKE AGAINST THE AKAGI" is a signed and numbered print by Robert Taylor from an edition limited to ONLY 1250 prints. Don't let this one get away! On June 4, 1942, in one of the greatest naval victories of all time, the Japanese fleet was decimated in a mighty battle off Midway Island by a handful of courageous United States Navy pilots.

It was a blow from which the Japanese Navy never recovered. Japan's strategists had long prepared for a decisive action in which they could destroy the U. Pacific fleet, and this they hoped to do at Midway. Admiral Yamamoto, Commander in Chief of the Japanese Combined Fleet, was convinced that a threat to Midway Island would compel the enemy fleet to challenge the overwhelming Japanese forces, under whose heavy guns and bombs, he imagined, it could not hope to survive.

Arrogant and over-confident, the Japanese were to fall into a trap that would cost them one of the most decisive battles in history, and alter the course of the war in the Pacific. First points went to the Japanese when the heroic U. Navy Devastator torpedo bombers were shot out of the sky, Bill Esders being one of the only two survivors who flew off carriers.

However, gathering unseen high overhead, flown by the most battle-experienced pilots in the U. Like hawks swooping on their prey, they came plummeting down from the sky. Within a matter of minutes, half of the entire Japanese Carrier Force was committed to the deep.

Recreating a scene from the Battle of Midway, Robert Taylor's remarkable "MIDWAY-STRIKE AGAINST THE AKAGI" gives us a dramatic pilot's-eye view of the Japanese carrier Akagi, as an S. Enterprise lines up his sights and prepares to deliver the coup-de-grace. We are treated to a superb study of the redoubtable Dauntless, with perforated dive flaps fully extended, as it hurtles towards the yellow deck. In addition to the artist this print was individually signed in pencil by SIX distinguished Midway pilots. Commander DICK BEST (Featured as the main character in the amazing new movie "Midway"). This print is in mint condition print, had been stored flat, and has never been framed. It has an overall size of 34" x 26" and comes with a Certificate of Authenticity and a descriptive single-page color flyer. GOOD LUCK AND THANKS FOR LOOKING! The item "ROBERT TAYLOR Midway-Strike Against Akagi S. Dauntless 6 sigs SOLD OUT RARE" is in sale since Sunday, November 10, 2019. This item is in the category "Art\Art Prints".

The seller is "brawnerfarm" and is located in Goldsboro, North Carolina. This item can be shipped to United States, Canada, all countries in Europe, Japan, Australia.