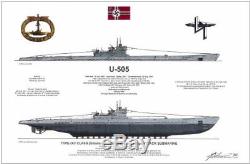 "AGAINST ALL ODDS" by the great naval/aviation artist Robert Taylor depicting a type VIIc U-Boat fighting off an American PBY Catalina attack off the Straits of Gibraltar in early 1944 is a RARE SEVEN signature signed and numbered limited edition print from an edition limited to ONLY 250 prints. Dont miss this great opportunity! Speaking of the threat posed by the German U-Boats, Winston Churchill said: Battles might be won or lost, enterprises might succeed or miscarry, territories might be gained or quitted, but dominating all our power to carry on the war, or even keep ourselves alive, lay our mastery of the ocean routes and the free approach and entry to our ports... The only thing that ever really frightened me during the war was the V-Boat peril. Over 2770 merchant ships were sunk by the U-Boats, but they in turn paid a terrible price: Over 500 U-Boat captains were lost with over 30,000 men. Of the 1150 U-Boats placed in service, over half were lost in action during the 1939-45 conflict. The U-Boat sailors were among the bravest fighting men of World War II. They pressed home their attacks when their position seemed hopeless, battled against vastly superior numbers, made huge sacrifices, and won their victories often in the most appalling conditions. That their fearsome trade was decreed by lunatic politicians does nothing to diminish their seamanship and the magnitude of their accomplishments. Their bravery was of the highest order. Robert Taylor's "AGAINST ALL ODDS" portrays the renowned defiance of the U-Boat crews. Caught on the surface by a PBY Catalina of the Fleet Air Wing based at Port Lyautey in French Morocco, the gun crews of a type VIIc U-Boat are quickly into action.

The 3.7 cm anti-aircraft gun is hurriedly reloaded while on the upper platform the two 2 cm anti-aircraft twins take chunks out of the Catalina's tail - enough damage to secure a respite from the attack. Soon they will dive to relative safety beneath the Atlantic swell. A masterpiece of military art from the master of air and sea painting, this rare print is a true collector's gem. In addition to the artist, this print is individually signed in pencil by submariners of the German Kreigsmarine, all of whom are holders of the Knight's Cross. This mint condition print has never been framed and, like all of our prints, has been stored flat.

It measures 32½" x 23½" and comes with a Certificate of Authenticity and a descriptive one-page sales flyer. This beautiful, incredibly detailed diagram print is in mint condition, measures 11" x 17", and is signed and dated by the artist.

With arguably the largest secondary market inventory in the world, Classic Aviation & War Art might just have it! GOOD LUCK AND THANKS FOR LOOKING! The item "ROBERT TAYLOR Against All Odds German U-Boat PBY Catalina 7 Sigs Bonus SOLD OUT" is in sale since Thursday, May 31, 2018. This item is in the category "Art\Art Prints". The seller is "brawnerfarm" and is located in Goldsboro, North Carolina.