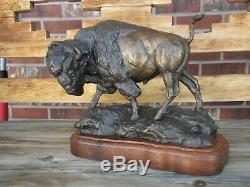 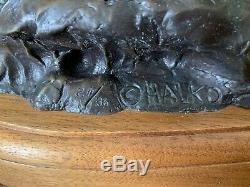 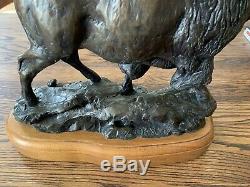 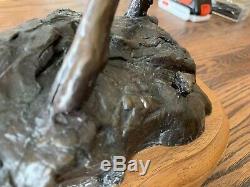 This bronze is 13 in height and is the perfect size for an office credenza, a fireplace mantle or a coffee table. This bronze is number 27 of an edition of 36.

Joe's works are in major collections around the country, including several museums. Joe Halko grew up a student of nature of a ranch south of Great Falls, Montana. He learned the habits of the fox and the skunk, the crafty ways of the crows who nested in the same tree year after year, and whether the storm clouds held precious rain or dreaded hail. He built toy trucks and tractors out of leftovers from his father's shop and sculpted with clay out of the creek bank using ranch animals as models. He learned the basics of taxidermy from an uncle and so began his serious study of the anatomy of game birds and animals.

Halko's first formal art education was Art Instruction, Inc. Of Minneapolis, a correspondence course. After graduating from high school, he worked as a taxidermist in Great Falls and studied art at the University of Great Falls before he was drafted into the US Army. With that commitment complete, he took the train to New York to study art at the Fisk Studios and to work as a commercial artist for a Long Island advertising agency. He spent his free time there at the Museum of Natural History sketching the taxidermy mounts and the backgrounds.

The school, work and big city museums were new and rewarding experiences, but the busy city was not where he wanted to be. Through all of this Halko had been studying painting and sculpting, and spending as much time as possible in the out of doors.

As it turns out the taxidermy and the biology degree were solid preparations for Joe's career as a wildlife sculptor. His first serious sculptures were done as aids for painting - to study shadows, dimensions, and foreshortening. As he did more of these sculptures he found that he really enjoyed the sculpting, and it came easily for him. He continued his day work as a sought-after taxidermist doing sculpting on the side until 1976, when he turned to sculpting as his full-time occupation. He has been fortunate to have lived in Montana all of his life.

He married Margaret also a Montana native in 1969, and they have two daughters who are now grown. There were many opportunities along the way to move to bigger cities and larger markets, to travel and participate in the so-called big time shows, but Halko wanted to live and to raise his family in the environment they all loved. They spent 17 years south of Cascade along the Missouri River where wildlife and bird life was abundant and much studied. In 1998 Joe and Margaret moved to Choteau, another beautiful spot in Montana.

It is a picturesque Montana town along the east front of the Rocky Mountains with easy access to the rugged wilderness and numerous wildlife preserves. Primarily wildlife sculptor, to a lesser degree wildlife and landscape painting and western- theme sculpture. Did traditional head mounts and rugs as well as life-size mounts.

1998 Commissioned by Tom Tracy CEO of Ford Remanufactured Parts to complete two sculptures of Ireland's hero Kevin Barry to present to the Prime Minister of Ireland Bertie Ahern, the President of Ireland Mary McAleese, and to the school and the family of Kevin Barry. 1994 Commissioned to design and execute "Return of the Wild Geese", a bronze sculpture of flying geese, to present to the National Gallery of Ireland. 1988 Montana FWP Region 4 Headquarters Percent for Arts Project - Twice life-size sculpture of 4 Canada geese. Western Rendezvous of Art (NWR show), Helena MT since its inception in 1978 - Elected to membership in 1980.

Society of Animal Artists, New York. Northwest Rendezvous Group, Helena MT. Allied Artists of America, New York. This biography, taken from interviews with the artist's wife, Margaret, was submitted July 2004 by a researcher at the Ashworth Collection of Native American and Western Art.

Halko joins an elite group of western artists from Montana such as Bob Scriver, Charles M. Seltzer, Edgar Paxson, Joseph Henry Sharp, Ralph Earl DeCamp and many others who documented the wildlife, the cowboy culture and Indian life of the great Rocky Mountain region. Joe passed away in 2009. The item "Joe Halko (Montana 1940-2009) Bison / Buffalo bronze sculpture Sold Out Estate" is in sale since Friday, September 20, 2019. This item is in the category "Art\Art Sculptures".