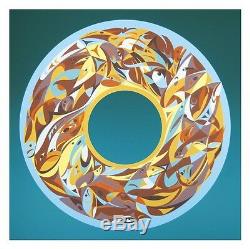 This is a new framed copy of Northwest Coast artist Susan Point's "Beyond the Edge" limited edition serigraph. The shape represents a spindle whorl for weaving - the main art form of the Coast Salish - which is filled with a panoply of Northwest Coast Native animals crest figures. Salmon, whales, owls, ravens, sparrows, frogs, and thunderbirds all fill this space in a colourful tapestry of West Coast symbolism. With dominant tones of green, brown, and blue, the palette is primarily earthy. This particular print is framed: it measures 35" x 35" unframed.

Susan writes the following about this print. Beyond the edge of the earths rocky crust, there is a thin blue line separating life on earth from the infinite blackness of space. This is our atmosphere just a few kilometres of water vapour and other gaseous molecules. Within the zone of our thin biosphere, life thrives and evolves. We humans are part of a web of interconnections closely linked to one another. All of our behaviours, whether biological, cultural or economic in nature, are activities within a larger ecosystem; we humans are not independent. Every aspect, particularly living beings on Earth are being impacted by our actions we each hold the world in our hands. Susan Point, although primarily self-taught, has received training in wood carving from master carver, John Livingston. She also completed a jewellery course at Vancouver Community College with Jack Leyland. In 1981, she began to study and work in Salish art, especially with jewellery and small sculptures. Susan has been a part of numerous group and solo exhibitions.

In 2009, her work was featured in. Challenging Traditions: Contemporary First Nations Art of the Northwest Coast. At the McMichael Canadian Art Collection in Kleinburg, ON.

In 2010, her work was exhibited in. Visions of British Columbia: A Landscape Manual.

At the Vancouver Art Gallery in BC; Coast Salish Nation Carving Gallery, BC; and Pavillion, and in the 2010 Olympic Games in Vancouver, BC. In 1986, she exhibited in. New Visions: Serigraphs by Susan Point, Coast Salish Artist. Which was organized by the Museum of Anthropology, UBC.

Her work has also been featured overseas, including in galleries in Switzerland in 1989 alongside artists Joe David and Lawrence Paul Yuxweluptun. Susan has been commissioned for many large-scale private and public collections since 1981.

In 1993, Susan created various glass, copper, and cedar panels for the Vancouver International Airport, and in 1994 she was commissioned to also carve a 16 diameter red cedar spindle whorl titled. In 2011, she carved a housepost titled. For the Vancouver Art Gallery, BC, and that year she also carved a red cedar Welcome Figure for Douglas College in New Wesminster, BC. Many of her pieces are featured throughout the city of Vancouver, at the Vancouver International Airport, and at UBC's Museum of Anthropology.

Since the early 1990s, Susan has received numerous awards that recognize her great artistic abilities and achievements. In March of 2004, she was appointed to the Royal Canadian Academy, and in 2006 she was awarded the Order of Canada. In 2007, she received a BC Creative Achievement Award for Aboriginal Art. Susan has been awarded Honorary Doctorates in Fine Arts from Emily Carr College of Art and Design (2008), Simon Fraser University (2008), and the University of British Columbia (2009). Susan has works in private and corporate collections in over 20 countries.

"Beyond the Edge", "Susan Point prints", "Spirit Wrestler", "Native print". The item "Huge Susan Point Sold Out 2015 Serigraph Beyond the Edge Northwest Native Art" is in sale since Thursday, February 25, 2016. This item is in the category "Collectibles\Cultures & Ethnicities\Canada\ Aboriginal". The seller is "artfromabove" and is located in Vancouver, British Columbia.