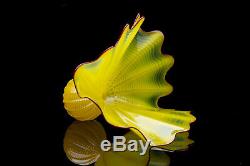 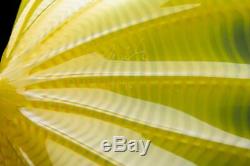 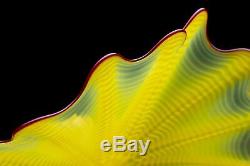 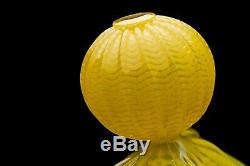 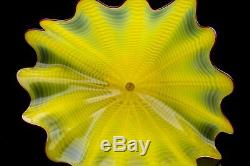 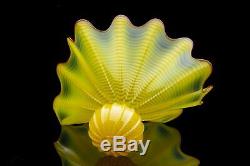 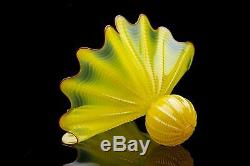 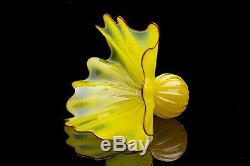 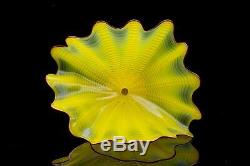 Guaranteed Authentic and includes gallery certificate of authenticity. Buttercup Yellow Persian with Red Lip Wrap is the Quintessential Persian - a flowerlike form resting on a ball foot with gently fluted edges and fine lines that spiral precariously around the body. The condition of this piece is new and comes with original acrylic case.

The first Chihuly Persians were made in 1986. An eccentric collection of brightly colored and unusually shaped objects - primarily small bottles and vessels - the earliest Persians looked archaeological to Chihuly, like excavated ancient treasures. Chihuly sensed that these objects represented a formal direction in his art that was experimental, new, and exotic. Exhibited for the first time in Chihulys 1986 solo exhibition at the Musée des Arts Décoratifs of the Palais du Louvre in Paris, the Persians were described in the exhibition catalogue as new possibilities from the blowpipe. 2 At the time of the Louvre show, the series was still untitled.

In the beginning, the Persians had to do with the contrast between two colors... Between open and closed forms... And the intensity of the body wraps, Chihuly has recalled. Body wrap is Chihulys term for the stripe of color applied to the body of a piece. Soon, the early Persians color-saturated, contrasting body wraps were seen by the artist as alternately Persian, Byzantine, and minaret-like, almost Persian and Roman too. More interested in the East than the West, Chihuly liked the sound of the word Persian, the associations it inspired, and the series found a name. An early interest in art beginning at a young age spurred Chihuly to pursue a long and varied artistic education.

Born in Tacoma, Washington in 1941 the artist grew up there and studies Interior Design at the nearby University of Washington. After his graduation he enrolled in the country first glass program at the University of Wisconsin. In 1968, he received a Fulbright Scholarship to study glass blowing at the renowned Venini glass factory in Venice, Italy. A the Venini factory, Chihuly was exposed to the team approach to glass blowing that he would go on to incorporate throughout the rest of his career. He later went on to study and receive his second masters degree from the widely respected Rhode Island School of Design.

After his graduation, Chihuly was asked to create and head the schools first glass department. During this time, he also maintained his Washington roots by beginning the Pilchuck glass school near Stanwood in 1971. It was here he first began significantly pushing the envelope of glass sculpture. He began creating the indoor and outdoor artistic installation which would later go on to become a hallmark of the artists work.

The Native American population of the Northwest would go on to play a landmark role in Chihulys work, as he would also go on to create a series inspired by their basket work. This famous series known as Baskets and Cylinders was showcased in 1978 at the Smithsonian in Washington D.

After this exhibit, Dale Chihulys career really began to take off. By 1980, he was showcasing in installations, one man shows, and art exhibits around the world including ground breaking shows in Israel and Brazil. World's Most Demanded Contemporary Artists. Happens 6 times a year with dates and pieces picked at random.

All items are listed with the utmost accuracy. If for some reason your item arrives and is not what was described please reach out to us immediately. No photos are altered and all photography is produced by a professional photographer.

Some photos are imposed in living room settings to give you a general idea of what the piece would look like. Others may have a mock up of a framing option we offer.

Created for the discerning art collector, Modern Artifact buys and sells some of the world's most collected and demanded fine art, antiques and memorabilia. Modern Artifacts is headquartered in Minneapolis, MN and has clients all over the world. We establish relationships with many art dealers, collectors and the artists themselves, to ensure our clients are offered an extensive collection to choose from. With many fine works of art by top names such as Robert Wyland, Steve Kaufman and Bert Stern, you are sure to find a piece that catches your eye and inspires your imagination.

We have the hard to find pieces that you have been searching for and some of the eclectic ones you didn't even know about but just have to have. We understand the needs of our clients and seek out the pieces they want to add to their collection. Whether you are new to art collecting and are just building your collection, or if you have been collecting fine art and antique for years, Modern Artifact has you covered.

Would you like us to frame any of our art to match your current framing or home? We have our own in house framing. We can show you examples and even photoshop the frame onto the piece to give you an idea of what it will look like. Feel free to message us on any framing ideas. Reach out to us regarding financing options.

Have a piece you think we would be interested in? Art aficionados in the middle of the frozen tundra: Minnesota.

The seller is "modern_artifact" and is located in Minneapolis, Minnesota. This item can be shipped worldwide.