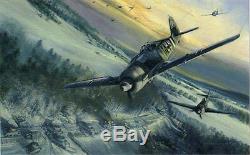 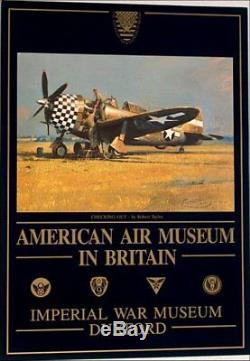 "WAR WOLF" by artist Robert Bailey is a signed and numbered limited edition print from an edition limited to only 500 prints. This is the ONE SIGNATURE LIMITED EDITION. Because Robert Bailey has moved on to other endeavors and is no longer painting war art, his prints are becoming more and more scarce.

Dont miss this RARE opportunity! The lightning victories enjoyed by the Germans during the first years of World War II were due in large part to the Luftwaffe. But by the fall of 1944, they were retreating.

All available resources were prepared for a last, desperate gamble. On December 16, 1944, Hitler launched a huge offensive in bad weather.

Aircraft from both sides were unable to participate during the opening days of what was later to be called The Battle of the Bulge. After Christmas, with the return of good weather, the ground battle reached its climax.

At this point, Allied and German pilots were eager to lend support to the monumental clash of armies. "WAR WOLF" puts us a few hundred feet above the treetops of the German/Belgian border at 11:15 a.

Eleven FW-190's of IV Gruppe, Jagdgeschwader 3 "Udet, " led by Leutnant Glaubig, were flying over the Eifel at low level to avoid radar. Suddenly, ground control radioed a desperate message, Achtungl Fifty-plus Indians in Ida Richard Five! These American fighters were probably from the 352nd. In the wild melee that followed, Feldwebel Oscar Boesch was too low to bailout if his aircraft was hit. He managed to shoot down one Mustang into the trees and escape with his life.

However, six other pilots of lV Gruppe were not so lucky: Leutnant Glaubig, Unteroffizier Leuchtenberger, Unteroffizier Rusch, Leutnant Rennwanz, Gefreiter Stumpf, and Oberfahnrich Buechsenmann were killed in the morning's action. The loss of so many experienced pilots was another blow from which the Luftwaffe could not recover. Five days later, on New Year's Day, over 150 German aircraft would be lost during attacks upon Allied airfields. After the Battle of the Bulge, the Luftwaffe was only a shadow of its former self, but the pilots gave their best to the end.

In addition to the artist each print in the edition is individually signed by. This mint condition print has never been framed and has been stored flat. It measures approximately 34" x 24" and comes with a Certificate of Authenticity. With arguably the largest secondary market inventory in the world Classic Aviation & War Art might just have it!

GOOD LUCK AND THANKS FOR LOOKING! The item "BAILEY War Wolf Luftwaffe FW-190 withROBERT TAYLOR bonus EXTREMELY RARE SOLD OUT" is in sale since Tuesday, December 22, 2015. This item is in the category "Art\Art Prints".

The seller is "brawnerfarm" and is located in Goldsboro, North Carolina. This item can be shipped to United States, all countries in Europe, Canada, Japan, Australia.